Women in Classical Athens: for a long time, it’s been a topic of discussion among scholars that proved to be both frustrating and interesting. Greek women might be less visible than their male counterparts in archaeology and literature, but this lack of evidence makes it all the more fascinating when they do show up. In this case I will look at their appearance in funerary contexts. Are women visible in death? What can we derive from their iconography and depictions on funerary items in relation to their role in funerary ritual?

Lekythoi and grave stelai from Classical Athens provide a wealth of data for the portrayal of (dead) women. Looking at their depictions of women, I will try to find out what phases of a woman’s life are depicted and in what kind of roles she appears, thereby hopefully discovering more about her life and her role in funerary ritual. I will present my results by following a timeline of a Classical Athenian woman’s life, from pregnancy to old age as seen in the funerary material record.”

Let’s start at the very beginning of life: scenes of pregnancy or actual childbirth. It so happens that there are no cases of pregnant women or babies being visibly born on stelai or lekythoi. Which is odd, because many women actually died in childbirth, making it a potential common scene for grave ornaments. You would also think giving birth is one of the most important moments in a woman’s life and it is surprising that artists would avoid a theme so close to reality on funerary items. However, this might be a classic case of imposing modern thinking on a different culture: it is possible that birth was less a moment for commemoration than it is nowadays, considering many babies died young. There is also the fact that birth was a very private occasion that happened inside, as we read in Attic literature and see in the dedications of celebration of successful birth at shrines of female deities (LEWIS, 2002). It might have been too personal and private a topic for pottery and stelai that mostly celebrate the public aspects of Greek life. Scenes of a woman being in labour however are depicted on some lekythoi and especially on grave stelai. This is to either show the cause of death (dying in childbirth) or the profession of the woman (midwife), which becomes clear from their inscriptions. The focus remains solely on the woman though: no pregnant bellies are visible, and the fact remains that we do not see female babies – or any babies for that matter – in childbirth.

Babies weren’t very visible after birth either. The ones we do find are mostly on lekythoi or stelai and are either depicted as male or with an indeterminate sex. Especially grave stelai seem to avoid this by showing swaddled babies (see image 1 below), which is not only truer to life but also makes sense, since stelai were required to suit a variety of customers (LEWIS, 2002). This hiding of the genitals isn’t very surprising, because in most of these cases the focus is on the dead woman as a mother, emphasizing her interaction with the child. Therefore the child’s sex simply doesn’t matter that much. 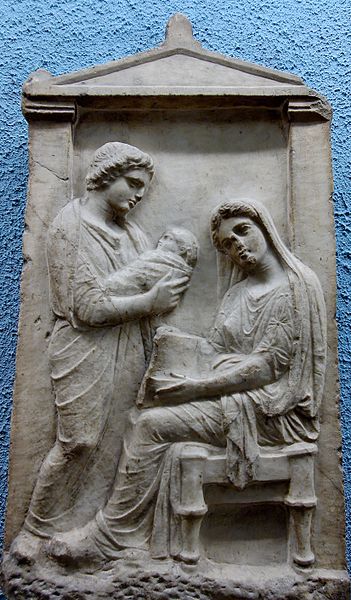 But what about young girls? The most prominent source of depictions of children actually come from choes: miniature jugs that were associated with the festival of the Choes, part of the Anthesteria (HAMILTON, 1992). But this research isn’t focused on choes. And beyond those, girls fall out of the picture in pottery, while boys actually enter it with scenes of masculine childhood (like playing games, being with their fathers in public etc.). This falls back to that same distinction between public and private: boys were becoming part of the visible public Greek life, while the lives of girls started to focus on the household. Pottery that was meant for export displayed a view of Greek public life where the importance of girls was limited. However, within the city itself, that importance was greater, and this shows on the grave stelai and lekythoi.

Stelai solely depicting girls have been found and here they are portrayed with pets, signifying their childhood. These stelai are simply meant to show that the deceased person was a female child. 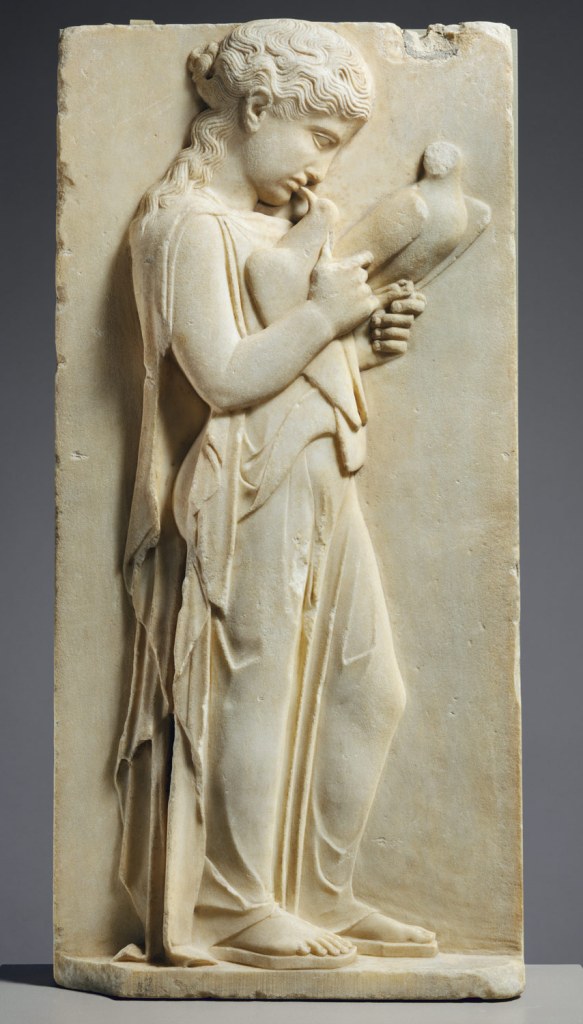 Besides that, girls on funerary items are mostly and frequently portrayed in the context of ritual mourning. Typical scenes like decorating the tomb or the prosthesis scene, where people gather around the deceased on their bier and mourn, are very common and very often have a girl being present as seen in images 3 and 4. The girls do not appear as child-like as they do on the choes: they’re not holding toys as attributes anymore and appear more like miniature women.

The most important role of the Athenian woman in funerary iconography is that of the mother. As we’ve seen, many stelai and lekythoi have been found emphasizing the bond between mother and child. Another scene in the same sentiment that is common on lekythoi is the so-called ‘departing warrior’-scene (LEWIS, 2002): a young man is leaving to go to war and his family members stand around him, including a woman. The woman in this scene is usually ageless, so it’s hard to tell if it’s a departure scene between a mother and a son or a wife and husband. However, a mother mourning her son is a common theme in Greek literature and it reflects reality: a son once lost is lost forever, whereas a new husband can potentially be found.

Apart from being a mother, domestic scenes of women have been found on lekythoi as well, though not many. One task that comes forward most is wool-working. The production of clothes was an important contribution to the economy of the oikos and the work marked women as female and virtuous. This explains why items that were used to make clothes are often found as votive offerings and grave goods, much like weapons are for males. Therefore it makes sense that this domestic scene has been found on lekythoi as well. 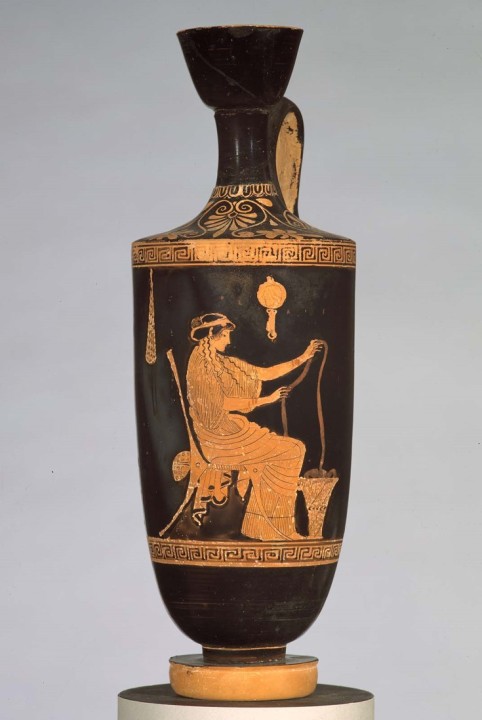 On to older women then. When it comes to grave stelai, I can be brief concerning the depiction of older women: they are hardly ever depicted as such. It seems to be the convention to portray them young, even though the inscription indicates otherwise (see image). This is not surprising, since stelai are quite public and a more ideal portrayal might have been preferable. Older women aren’t frequently depicted on pottery either. When they are, they have a stooped posture, white hair and sometimes a wrinkled face, and it’s in a mythological context. When it comes to lekythoi, they are hardly present at all. The only one I’ve found is a scene where an older woman fills the cup of a young man. In this case her age and weakness seem to underline the young man’s youth and masculinity. 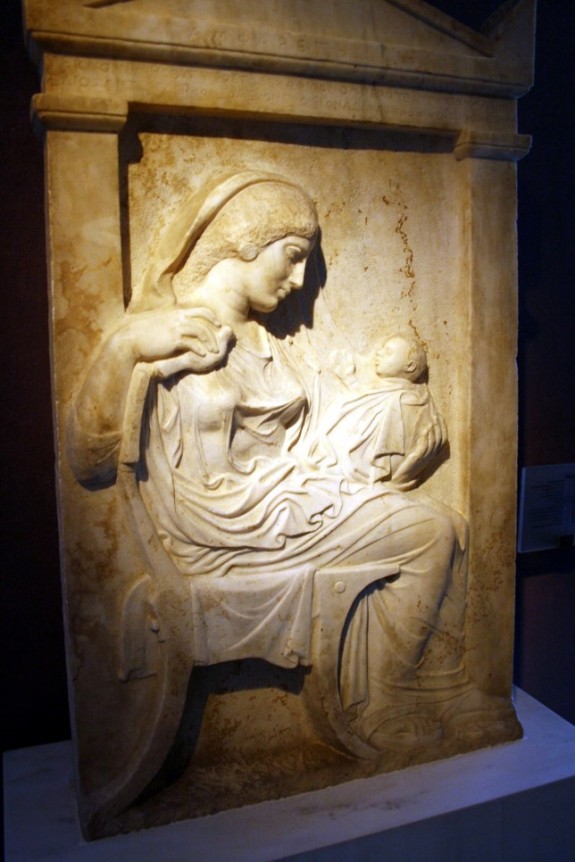 My conclusion would be that Classical Athenian women are remarkably visible in death. They may have had a limited role in daily public Greek life, but their presence on funerary scenes tells us they had a significant role in funerary ritual – seen in their assisting appearance at decorating the tomb or mourning at the bier. They mostly appear in the role of mourner, as a girl or a mother. Other aspects like old age, pregnancy, or any out-side activities are hardly present. This can be explained: an older woman isn’t the ideal image of a woman one would want to become public, childbirth or pregnancy is too intimate to depict, and the most usual role of a woman was that in her household. So, funerary iconography emphasizes the woman in the context of ritual and mourning, but the question is why? Women have always had a special role in ritual and worship , but I think her significance in funerary ritual is connected to with her ability to give life. She is literally present at the beginning of life, and her life is more domestic-oriented than that of a man, so isn’t it rather fitting she is present when someone leaves this world?

GILHULY, K., (2009), The feminine matrix of sex and gender in classical Athens, Cambridge

GROSSMAN, J. B., (2001), Greek funerary sculpture : catalogue of the collections at the

10 thoughts on “The funerary iconography of the Classical Athenian woman” 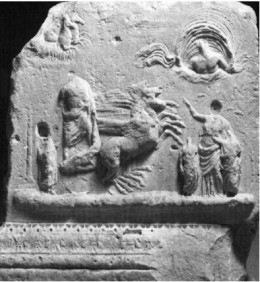 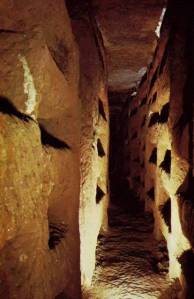 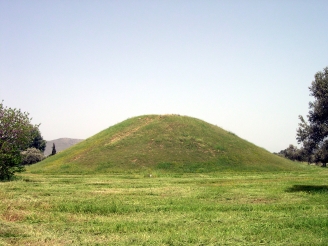 Tumulus of Marathon as seen today. In the centre of the mound is a cremation tray that contains the ashes of the cremated remains of all 192 fallen soldiers. Originally, there were probably ten grave stelae surrounding the mound containing all of the names of the soldiers according to the phylai they belonged to. 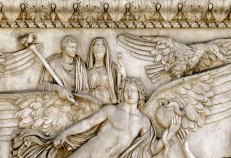 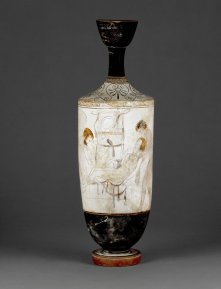